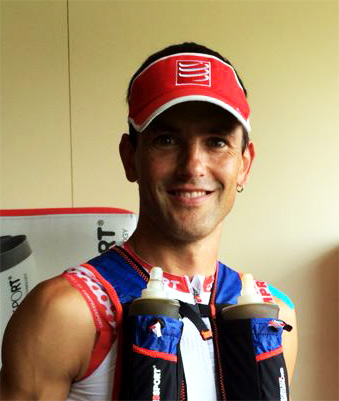 He has no clear memories of those stories, but his mother and his childhood teacher remind him that his inclination towards mountain comes from far away; when he was barely 5 or 6 years old, he used to play truant and go to the mountain on his own.

He discovered climbing when he was 17. At that time, he was studying hotel trade in the School of Hotel Management in Leioa and it was there where he met Iñaki Marko “Kongi”, one of the strongest climbers he has ever met. He started frequenting the nearby mountains, but he soon changed his regular holiday destinations for stays in national climbing schools first, and international ones after. He was a climber for more than 10 years (7c+ routes), combining this activity with his job as a cook. After three years of duathlon and triathlon competitions, he achieved his best result in 2006, enabling him to participate in the XTERRA race (Hawaii) which is the off-road triathlon world championship.

After having worked as a cook in some of the best restaurants of the world (Martin Berasategui, Michel Guerard, Zuberoa, Etxebarri, Juantxu,…), in 2000, he switched gears and started to work in a catering company with the intention of enjoying life a bit more. But it was not till 2008 that he started his course as a trail runner. In 2009, he run three ultras to get the required points to go to the UTMB. In 2010, he got the third position in the UTMB, and among his best results there are the wins in Transgrancanaria, Trail du Sancy, G2H, Trail Menorca,… He also got the fourth place in Lavaredo Ultra Trail (2012) and the second in Geres Trail (2014). All of that while combining Ultra Trails and his work as a cook, once more.

From his beginnings, the mountain only brought satisfaction to him: the chance of discovering unforgettable sceneries, new countries, people who was a pleasure to get to know… He remembers with special emotion the first race he won, Aramotz Mendi Lasterketa, his third position in the UTMB, the win in the Transgrancanaria,… It could not be possible to name each positive contribution this sport has offered to him, but he has no doubt: when running in the mountain, he is content.